Please enter your username or email address. You will receive a link to create a new password via email.

A rare 47aces Freehold Land @ Teluk Intan and probably the last piece of land available in this area good and suitable for development.

Strategic location, just about a 100 meters in from the main trunk road and
surrounded by existing housing and commercial properties.

Bagan Datuk is just another half an hour drive away to the south west.

Previous approved DO for mixed development of housing and commercial shops.

In the early days, the town was known as Teluk Mak Intan, after a female Mandailing trader. It was here that the Perak rulers held court from 1528 until Kuala Kangsar became the royal town in 1877.[2]

During the British protectorate era, the named was changed to Teluk Anson (Anson Bay), in honour of a British Officer and last Lieutenant-Governor of Penang, Major-General Sir Archibald Edward Harbord Anson who drew the plan of the modern township in 1882.

In 1982 during the centenary of the town’s establishment, the name was changed again to Teluk Intan (Diamond Bay) by the Sultan of Perak. Leaning Tower of Teluk Intan is one of the town attractions. The town has a number of colonial buildings and Chinese shophouses together with modern buildings, few shopping complexes and a modern cinema.

The town was founded on the river bank of the Perak River. The river forms an oxbow meander as it flows through the town, and the town is built around the oxbow. During high-tides, some parts of the town will be flooded with water even though there are watergates and banks to protect the town. Various measures taken by the government to solve the problem have seen relatively few floods in Teluk Intan nowadays. There has been speculation that the river’s flow will erode the narrow neck of land in between the loops of the meander effectively turning Teluk Intan into an island. 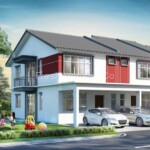 Mark Your Properties in the Map Today!

All Your Properties Search is Here!